What they are saying on Vertical Sleeve.com about Mexicali Bariatric Center 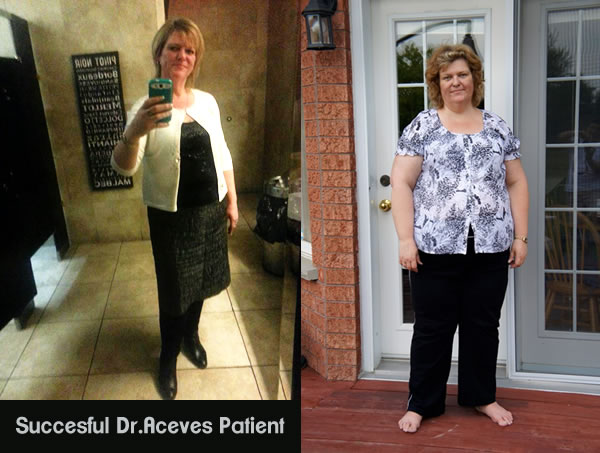 Posted A week ago
I just want to thank everyone for their posts. I chose Dr. Aceves for revision surgery (lap to VSG) in large part due to the great information from folks on VST. I am scheduled for June 14th. So far, the experience with Nina (my PC) has been fantastic. It’s dramatic how much better even the patient coordination has been compared to my experience with the two U.S. surgeons I’ve worked with.

Posted 3 weeks ago
I just thought I’d share with those who are considering Dr. Aceves for their sleeve – I’m currently doing a rotation in bariatric surgery and the other day, I told my preceptor that I had been sleeved. He (a bariatric surgeon himself) was absolutely blown away by my results and actually called his 2 bariatric fellows to the room just to look at my abs and marvel at the fact that they would’ve never guessed I had any sort of bariatric surgery and that I could get results like this without plastics. My preceptor kept asking how Dr. Aceves managed to remove my stomach through such a tiny incision – he said he would’ve never figured I was sleeved based on how tiny my scars are! He even thought Dr. Aceves must’ve gone through the mouth as opposed to through the abdomen.

So there you go, even other specialists in this area are blown away by his work!

Posted March 1, 2012 – 5:02 PM
gramom123
Hi: I traveled alone from Boston, MA to Mexicali to have my VSG done with the fabulous Dr. Aceves, who has professional credentials that are comparable to anyone local, plus he has done over 1300 VSGs, as compared to my local surgeons who had a couple dozen only.. He was not the least expensive of the Mexican doctors, but I was traveling so far I needed to make sure I would get the best care I could find. His staff was exemplary in how responsive and how compassionate they were. I met with both Dr. Aceves & his surgical assistant Dr. Campos every day during my 4 day stay, except the last one because I left so early to head back to San Diego. The anesthesiologist spent time with me before & after the surgery too. I was very happy to stay at the immaculate, well-run Almater Hospital for 3 nights, with round-the-clock care. I had 3 leak tests prior to being discharged and had not a minute of nausea or pain- just the discomfort from being blown up with gas and I was able to work through that by walking. I had my own private hospital room and bath with a couch and chair. It was very comfortable. I had free wif at the hospital, so I spent lots of time looking at this forum as I recovered. That’s my personal experience. I have had a fabulous recovery in the past 5 weeks and would recommend Dr. Aceves to anyone. After spending umpteen hours on this forum it is clear that many people had great experiences with many different Mexican doctors. Good luck with making this decision.

Posted 2 weeks ago
amytug
Wonderful!!! I have chosen dr. Aceves and I couldn’t be more excited!!! Taking notes.

nursing38
Thank you for all the wonderful  info you have provided. I am barely starting on this journey. I have yet to contact Dr. Aceves, but he has done surgery on 4 people that I know and all has been great. I know I want the surgery but am still scared as I have never been in the hospital or had surgery for anything. trying to get up the courage at this point to call him.

Posted A week ago

clk
Not only money. Experience and quality of care! I could have chosen any doctor and did research three from the outset – two stateside and Dr. Aceves in Mexico. After contacting each office and having several interactions with each, Dr. Aceves won HANDS DOWN. Yes, he was cheaper but only by a few thousand – not enough for me to make my decision solely based on money.

I got 4 days in the hospital instead of being sent home 23 hours later with drains in my body. I got to see my doctor and his assistant several times a day every day I was there. I had top notch care from one of the best sleeve surgeons out there. Dr. Aceves has done well over a thousand sleeves by now and still has a record of zero leaks. Oh, and at nearly two years out I still hear from the office occasionally asking how I’m doing!

And to continue on an only loosely related note, I’ve lived overseas for most of the last ten years and I will tell you that in my experience a lot of Americans have this idea that health care is somehow lacking in other countries simply because they aren’t as developed as the US. Now, granted, in some places this is absolutely true (Dushanbe, for instance!) but in other places the care can be superior (at least as far as personable doctors and staff go) and equal to the care in the states – at a FRACTION of the cost. Case in point: I just had twelve tests done to figure out if I have a problem with my hormones. I had my labs sent to Almaty, Kazakhstan and I had my ultrasounds (three of them) performed here in Bishkek, Kyrgyzstan. Total cost for nine blood tests and three ultrasounds, all performed on the same day I made the appointment with results in my hand within 24 hours? Less than 3,000 som…or roughly $65! All in safe, sanitary and totally up to US standard conditions. I also had IVF w/ICSI performed in Kyiv, Ukraine in 2007 for a fifth of what I was quoted stateside and again, great conditions and successful results.

So sometimes people choose to go elsewhere because they can. Because the medical care in the US is completely messed up and it’s almost impossible to get good quality care at a reasonable price.

Okay, I’m done! This is clearly a peeve of mine, sorry to completely go off. I see this same question posted over and over again and it never fails to annoy me that some people think that going anywhere but the US is automatically based upon money and is always going to be a less safe option.
Posted June 1, 2009 – 8:04 PM
Elisabethsew
I’ll start by saying that I am a registered nurse and hold a PhD in education. Given my medical and research background, you can be sure that I did a lot of searching before deciding on who I would allow to operate on me.

Because I was a self-pay for the VSG revision (banding was via insurance), I looked into Mexican surgeons. The three U.S. surgeons I explored wanted $22,000 – $26,000 and that only included the surgery and one night in the hospital.

I wanted a surgeon who was certified in bariatrics, one who had done over 250 revisions, one who operated out of a clean hospital with an intensive care unit in case I needed that level of care, and one who insisted that the people taking care of me post-op were registered nurses. I also looked into complication rates and talked with others who had used the surgeons I was considering. Finally, I wanted to be sure that when I left Mexico, I would be safe to carry on with my life in the U.S. That meant making sure complications were prevented.

Dr. Aceves met my criteria. He did 3 different leak tests to make sure all was fine and kept me in the hospital for 3 nights. I had a chest x-ray, an EKG, a urinalysis, and blood work prior to the surgery and a complete unfill of my band after a barium esophagram. I was seen by Dr. Aceves, his assistant surgeon, the anesthesiologist, and a medical MD all prior to surgery.

My experience was text book and I have no regrets. If you’re considering going to Mexico for surgery I highly recommend Dr. Aceves and his team.

Rosebud2
He is the most caring doctor I’ve had since I was a little girl.

Posted June 2, 2009 – 6:28 PM
Oregondaisy
Plus he has a great personality and is very caring and concerned that you understand exactly everything he tells you. He’s a great doctor!